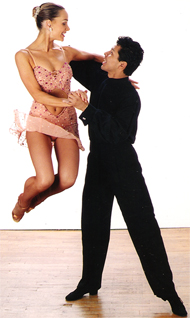 Since 1998 Marianne Hettinger has been successfully teaching thousands of students as a professional ballroom and Argentine tango coach as well as a jazz, ballet and tap instructor. Since 2005, Marianne has been teaching the dance program at the NEW YORK HEALTH & RACQUET CLUB, the only comprehensive ballroom dance program in a New York City fitness club, including BALLET and ZUMBA and REBOUNDING.

CHOREOGRAPHER and DANCER for FILM and TELEVISION

As a choreographer and writer/ director she has worked on her own films, MANGO TANGO, SAINT VITUS DANCE and STRAD FOR LUNCH, many commercials, a one- person- show "Heaven & Earth" and Broadway Cares benefits. She assisted DAVID PARSONS of PARSONS DANCE as a tango expert for an original piece starring DESMOND RICHARDSON and a Salsa piece, and choreographed a dance sequence on television's AS THE WORLD TURNS (CBS). For more information, go to www.mariannehettinger.com

THE YOUNG DANCER IN GERMANY

Marianne Hettinger was born in Germany with a passion for dance. She started taking gymnastics at age four, modern dance at seven and ballet at nine. When she saw Gene Kelly in the movie "An American in Paris", her dream to come to America to dance, was born. She first studied with Elisabeth Müller-Brunn, a former protégé of modern dance icon Mary Wigman, then at the OTEVREL BALLET STUDIO and ballroom dance at the TANZSCHULE TRAUTZ in her hometown of Augsburg. From age 14-18 she studied pantomime, worked with an experimental theater company "Freies Theater München" and was an intern at the State Theater Augsburg. At the same time she commuted to take weekly lessons a the prestigious DANCE CENTER IWANSON in Munich, a roundtrip that took 6 hours for the young dance lover. During this time she already taught ballet lessons after school.

Right after high school graduation, Marianne moved to New York City, not knowing anybody there, to pursue her dream of dancing and acting. She received scholarships to study at STEPS ON BROADWAY, The ALVIN AILEY DANCE CENTER, the MERCE CUNNINGHAM DANCE STUDIO and the NATIONAL SHAKESPEARE CONSERVATORY, where she studied acting and directing as well. While still studying she was pulled out of a ballet class by a TV producer and hired as a principal dancer for 9 national commercial spots by the Kroger company, in which she portrayed scissors snipping prices.

In 1996 Marianne rediscovered ballroom dancing, which she had learned at age 15, and within a few months, after pairing up with Lucas Jaime, the couple won their first ballroom dance competition and went on to win many dancesport championships between 1996-1999. They competed in professional American Rhythm (Latin), Theatre Arts and Cabaret, Show Dance and Hustle. They received coaching from some of the best teachers in the business: Pierre Dulaine, Louis Van Amstel, Victor Kanevsky, Rufus Dustin, Nick Kosovich, Diana and Gary McDonald, Gary Pierce, Eddie Simon, Karen McDonald, Peter DiFalco and many others.

Here is a list of dance competitions in the Professional Theatre Arts, Show Dance and American Rhythm categories they excelled at:

Since 2000 Marianne Hettinger has been making featured guest appearances under the direction of the brilliant conductor JACK EVERLY with National and International symphony orchestras:

Below: Marianne Hettinger with Antonio Banderas on the Letterman show.

Off-BROADWAY she has played 13 different roles in the hit show LES INCROYABLES, danced the Waltz in the FEATURE STEPFORD WIVES and has danced in numerous national commercials and on the LATE NIGHT WITH DAVID LETTERMAN in which she danced a duet with ANTONIO BANDERAS.